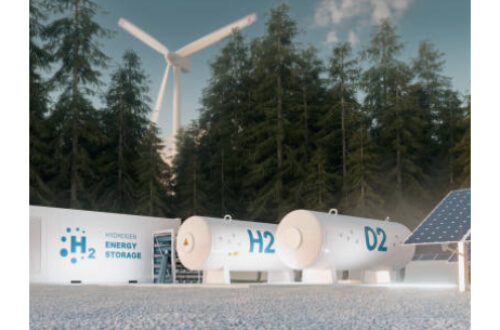 We are living in exciting times where the energy we use at home and in the office comes from a diverse set of sources. Safe, clean and reliable low-cost energy storage will enable greater use of periodic green energy sources such as solar and wind power. High density energy storage technologies, such as lithium-ion batteries, are compact and enable a wide range of products such as electric vehicles and home energy storage systems.  Due to their relatively high energy storage density, lithium-ion batteries are being used in increasingly larger scale applications like LS Power’s 230-Megawatt energy storage facility near San Diego, California.  In July 2021, a similarly sized facility outside Melbourne, Australia suffered an unfortunate fire, where a 13 metric ton containerized lithium-ion battery created a significant cloud of toxic smoke and took 3 days to control.  This and other incidents remind us that even with the best manufacturing practices, lithium-ion batteries are not 100% reliable and can even be deadly. The bigger the battery, the bigger the hazard.  Companies like QuantumScape and Sakuu are making great progress on developing reliable solid-state electrolyte lithium-ion batteries that are less flammable and safer. These newer batteries use lithium metal as an anode material and ceramic electrolytes which hold their form amidst external force or temperature changes; therefore, they are much safer than the organic electrolyte with polymer separator-based lithium-ion batteries commonly used in today’s cars and portable electronics. However, these solid-state electrolyte batteries are still at least 5 years away from large scale production.

The majority of lithium-ion batteries use nickel, cobalt, aluminum, and manganese based cathodes.  As a result, a tremendous amount of cobalt and nickel waste will soon pile up as people discard used lithium-ion batteries.  Moreover, there are growing concerns that there are not enough known deposits of critical elements such as cobalt and nickel to make all the batteries we need.  Battery prices will eventually rise unless we create ways to economically recycle batteries to recover the cobalt and nickel.  In addition to land exploitation, African cobalt mines are infamous for using child labor and paying very low wages in unhealthy and dangerous working conditions.  It makes me wonder if we are exploiting less fortunate people and natural resources, while poisoning the earth just so wealthier people can drive “non-polluting” electric cars?  Developing processes to recycle batteries to reuse cobalt and nickel is a necessity, however mined cobalt is still less expensive than recycled cobalt, therefore there is less commercial drive to recycle cobalt. Lithium-ion battery metal waste and toxicity issues have created an unusual opportunity to reconsider hydrogen as an environmentally benign and sustainable source of energy and energy storage.  A true blast from the past.

Over forty years ago, my twin brother Ken and I briefly experimented the simplicity of converting electricity and water into hydrogen by building a hydrogen electrolyzer. We were always very curious and liked to tinker with electricity and household chemicals. Our home laboratory was a heavily worn, somewhat dilapidated, work bench located in the back of our parents’ garage.  Our work bench was equipped with a 4-inch vice, plastic toolbox, volt meters and a wall mounted peg board holding screwdrivers, wrenches, and miscellaneous wires. It was not fancy but served us well for making mischief.  Cleverly we painted the workbench flat black to conceal the many scorch marks caused by some of our more ambitious experiments.  We had lots of fun, and like most parents in the 1970s, Mom and Dad had no clue to what we were up to in that garage.

While in sixth grade, we learned from another student that one could create hydrogen gas bubbles using water and 6-volt lantern batteries. Wow, make hydrogen with a home built electrolyzer? We’ve got to try it!

Chemically, this is expressed as:

Making hydrogen looked easy and we wanted to try it out right away, so when we got home that day, we repurposed a 32-ounce 7-11 Big Gulp cup (paper) to build a prototype hydrogen generator. Blowing caution to the wind, we cleared our workbench and scavenged three 6-volt lantern batteries for our experiment.  We wired all three in series and used our analog voltmeter to measure the DC voltage across the cells. Next, we filled the Big Gulp cup half full of tap water and placed the plastic lid back onto the cup to capture the hydrogen.  We then inserted the positive and negative wires through the cup lid so that they were submerged three inches below the water line. Each wire had a copper foil sheet about a half inch wide and an inch long crimped onto the end. Figure 1, depicts a vintage paper Big Gulp cup, not recommended for hydrogen energy experimentation. 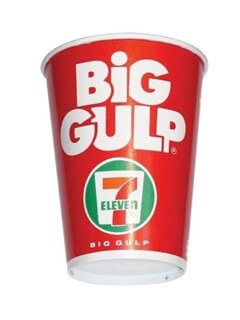 With the experiment setup complete, we connected the wires to the battery, and were surprised that nothing happened.  No bubbles, therefore, we assumed that no hydrogen was created.  Our analog voltmeter (home built kit from Radio Shack) read 18 volts, and something should have happened.  After some discussion, we determined the water was not conductive enough since we should have measured some voltage sag to indicate electron current flow.  I ran into the house and grabbed the container of baking soda from inside the kitchen refrigerator and added 3 tablespoons of baking soda to the water in the cup, stirring it vigorously.  We made sure the wires were spread 3 inches apart and then placed the plastic lid back onto the cup.  This time, when we attached our batteries and observed through the straw hole on the cup lid, we saw lots of bubbles form at the negative and positive wires. Voltage fell to less than 15 volts, as expected, confirming current flow. Interestingly, we observed both electrodes making lots of bubbles.  How do we confirm we are making hydrogen? Ken had a great idea, taking advantage of the fact that hydrogen was flammable.  If we could ignite the gas, that would confirm we have created hydrogen.

Though we were fearful of a possible rapid exothermic event but still wanted some sort of reaction, we decided to flick burning paper matches at the energized and bubbling Big Gulp electrolyzer at a safe distance of three feet.  Energy created by combustion of oxygen and Hydrogen should be rapid and very exothermic, as described by the equation below:

Ironically this is something Ken and learned in the hard way in 6th grade.

It was the third match that did the trick - there was a sudden and deafening explosion and red flash that instantly destroyed our electrolyzer, spraying us with baking soda water. Using basic thermodynamic calculations, I estimate the energy release of the Big Gulp Explosion was about 6 kilojoules in 100 msec or roughly 6 kilowatts.  The paper cup explosion caused a very big mess, and my hearing took hours to recover.  Our mistake was that for every bubble of hydrogen we made in the cup, we also made a half bubble of oxygen.  They were both made inside the cup and mixed in the perfect proportion.  When Hydrogen and even small amounts of Oxygen are combined, the resulting gas mixture is highly flammable and reacts almost spontaneously to any thermal ignition source.  More oxygen accelerates the process.  Please do not try that at home.

Engineering solutions to challenging problems are best when they use what we all have in abundance. Water is an amazing substance since it is necessary for all creatures on earth, infinitely recyclable, and completely cleanable and renewable.  It also facilitates inexpensive transportation of goods and people.  Water is practical too and acts as a coolant. In ice form it is durable and can even be used to fabricate shelters.  Using solar or wind energy, modern reverse osmosis filtering systems equipped with isobaric energy recovery devices can create elementally pure water from seawater at the cost of about 2.0 KWH per cubic meter. There are few substances like that on Earth.  Technically, the water molecules you drink today may be the same water consumed by the Ancient Romans or early prehistoric inhabitants of the Fertile Crescent. With its versatility, hydrogen energy storage would allow you to live anywhere on the planet! Stored electricity via hydrogen gas made by alkaline water or proton exchange membrane electrolyzers could be converted back to electricity using solid oxide or polymeric Proton Exchange Membrane devices (PEM) with efficiencies greater than 75%. Water and electricity produced by the PEM, see Figure 2, could then support indoor or outdoor farming. No cobalt or nickel metals are required, and the conversion process does not generate heat and carbon dioxide.  With all these advantages, and practically an infinite supply on earth, it makes sense why engineers and scientists are shifting to using water (a natural hydrogen source) as a clean source of energy.

A hydrogen energy economy is rapidly emerging, primarily driven by Europe.  Companies like Plug Power, Proton, Cummins, Toyota, Teledyne, General Electric, and many startup companies are working on hydrogen energy products.  A common old school product that Elcon Precision makes using photoetching is a compact alkaline water electrolyzer (sans Big Gulp Cup).  These devices are lightweight, low cost, long lasting, and made out materials such as titanium.  Thin coatings of electrically conductive metals like platinum and palladium help improve their efficiency and durability.  Commercial electrolyzers can be very large and convert electricity into hydrogen and oxygen gas from alkaline water.  Hydrogen can then be converted back to electricity using polymeric or solid-state ionic membrane fuel cells. 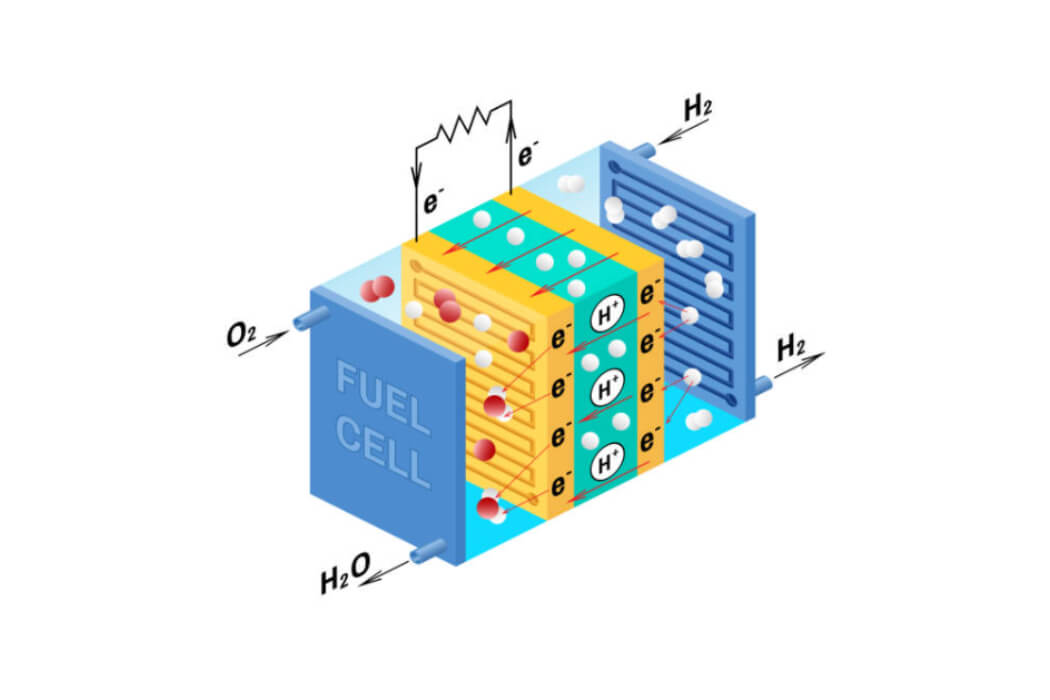 Proton exchange membrane converters using hydrogen to generate electricity make more sense for powering electric motors that propel larger sized commercial trucks, trains, and busses than lithium-ion batteries. Large vehicles have lots of available volume to store hydrogen gas in liquid form, have the space for larger membranes, and the driver would benefit from fast filling from liquid hydrogen fuel stations. High-capacity lithium-ion batteries are less of a benefit for trucks and trains, and due to their size, would require at least 1 hour to fully charge, therefore a hydrogen solution is a more practical alternative fuel for vehicles currently powered by soot-producing diesel fuel.

Elcon Precision has learned from NASA engineers that hydrogen electrolyzers will also be instrumental for Artemis, the next large-scale mission to colonize the moon. Ice trapped in shadowed deep craters on the moon (see Figure 3) can be mined to provide water, oxygen, and fuel for Artemis. In addition, missions to Mars and other planets could originate from the moon using hydrogen extracted from lunar lce as fuel. Materials challenges regarding the Artemis moon colony will be a topic of discussion during our Explore the Space Webinar mid-September 2021.

In summary, rapid adoption of lithium-ion batteries for small to medium sized electronics applications, including personal vehicles, will grow rapidly over the next 10 years. Lithium-ion batteries will create large demand for mined cobalt and nickel, unless efficient battery recycling technologies can be developed and deployed rapidly. We should consider alternative electrical energy storage solutions for larger sized vehicles to reduce environmental damage from battery waste materials.  Not one energy storage solution is perfect for all applications, and a portfolio of energy storage technologies may be a better solution for our planet than betting on one sole technology.  Elcon Precision supports both lithium-Ion and hydrogen based energy storage technology developers through providing prototypes and production parts for fuel cell plates, battery grids and components. We are proponents of using renewable energy and understand that a portfolio of energy storage technologies will be needed to serve a wide range of personal and commercial applications. 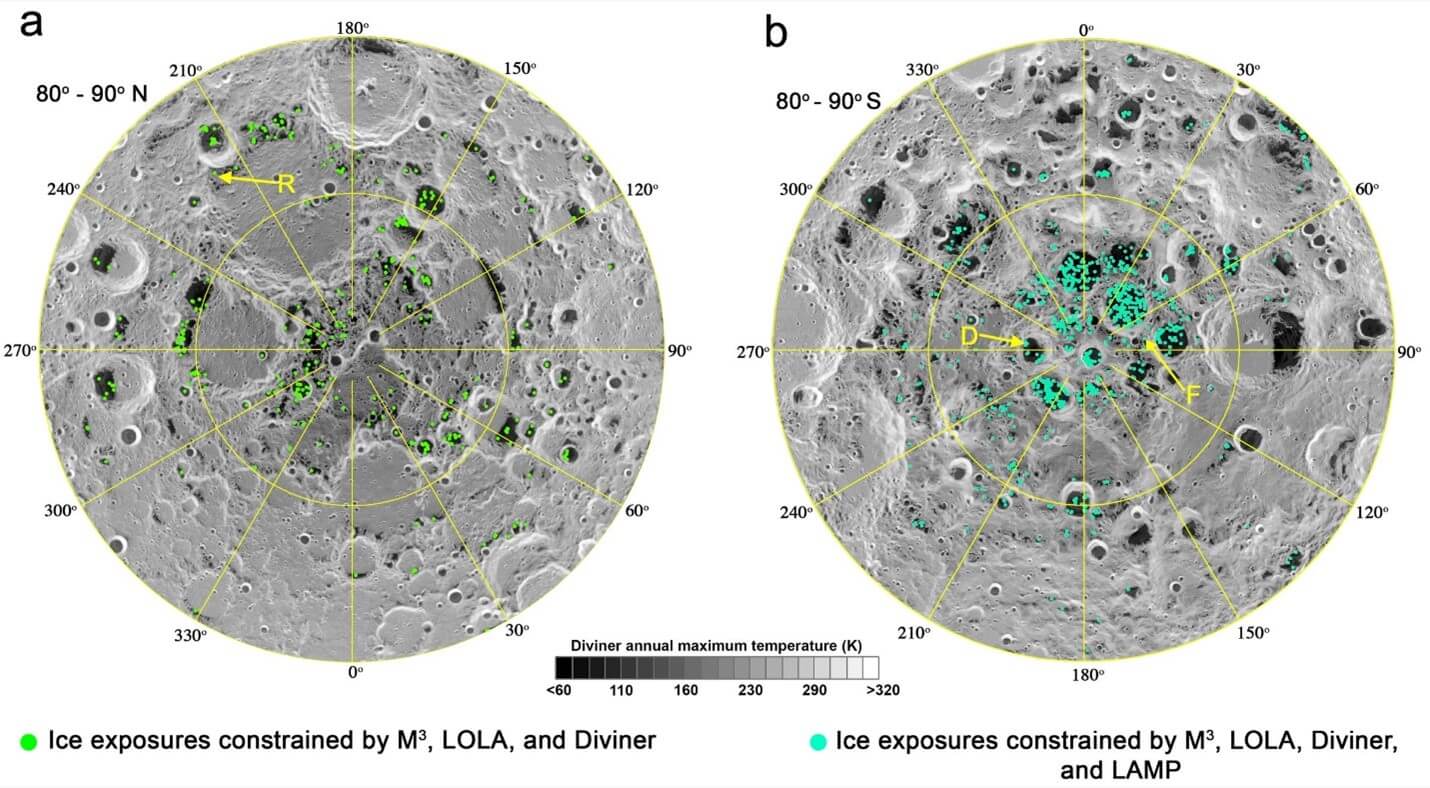 Figure 3: Coordinates of ice trapped in deep craters on the moon.