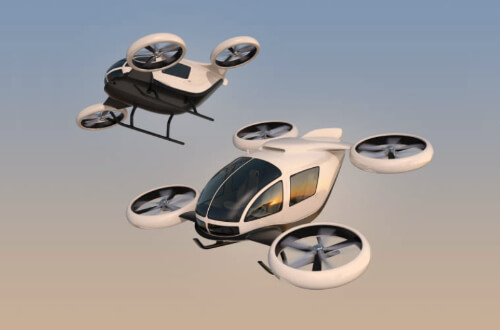 The Future of Electric Aircraft

Happy New Year everyone!  2022 has finally arrived after a challenging 2021. Although many of us are still working from home with very little travel, we’re getting stir crazy and need to get out to see our customers and help them develop effective manufacturing solutions for their products.  However, in the meantime we can escape our homes by using our imagination to vicariously travel in electric aircraft.  This blog will discuss the future of electric aircraft as part of our “Elcon is Everywhere” series.  Elcon Precision is working with next generation battery developers, Vertical Take Off and Landing (VTOL) aircraft companies, and universities to help them create a new generation of safe, innovative electric aircraft.  We’re working with them to increase energy density, develop lightweight energy storage and power electronics, and microfluidic systems for fuel cell and hydrogen technologies.

When I was about 8 years old, my father purchased an airplane kit made of balsa wood. The kit was easy to assemble with some glue and used a rubber band to store enough energy to enable the plane to fly about 50 feet.  Launching the plane was done using a sling shot type device since taking off from a standstill used almost all the energy stored in the rubber band.  Since the aircraft was fixed wing, the rubber band supplied just enough energy to provide lift from the wing to keep the airplane aloft until the rubber band unwound and the plane glided to a soft landing. The balsa aircraft was fun to learn with, but wasn’t strong enough to fly with even a small motor and battery. The wooden aircraft taught me that taking off requires the most energy and a fixed wing design improves safety if there is an engine or fuel problem.  The fixed wing design is ideal since engine or power failure is always a possibility during flight and this design is favorable to a safe landing. 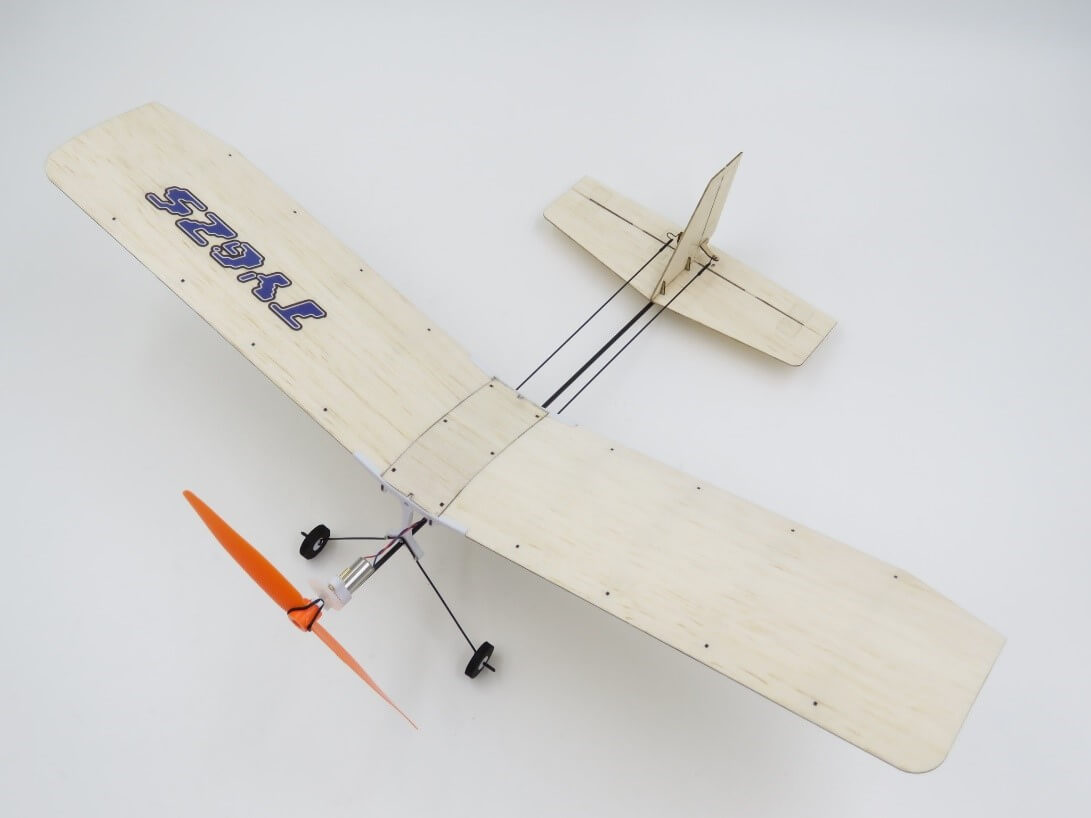 Fast forward forty years later, we find ourselves in a world where electric helicopters and drones are inexpensive and very capable.  For less than $100 one can purchase a lithium-ion battery operated drone that includes a camera and real time display connected to your mobile phone. The combination of higher energy density lithium cobalt oxide batteries and compact and energy efficient rare earth magnet motors has created an entirely new class of aircraft.  These range from inexpensive drones with little payload capacity good for taking aerial images to air taxis capable of safely carrying passengers over short distances.

Autonomous drones of similar construction are being adapted to applications such as home package delivery, firefighting, sky writing, and providing emergency aid.  There have been numerous technical papers written on self-directed drone coordination for firefighting and aerial surveillance for improving security.  The small size and maneuverability advantages of electrically powered drones are starting to be used for fighting fires in California’s rugged mountain terrains.

Modern drones can also be weaponized, and in high numbers, rather difficult to defend against during a swarmed attack. In response to this, Raytheon and other defense contractors have developed lasers and directed energy weapons to neutralize many small targets at one time.  These systems rely on the fact that disabled helicopter drones will quickly crash due to the lack of a fixed wing.  For more sophisticated drones, Raytheon has developed a missile-based system to counter drone threats.  The Raytheon UAS anti drone system was developed to defend against drones with fixed wings by launching small radar guided missiles either individually or in swarms.  Below are images of this system and a drone storm borrowed from their web site. 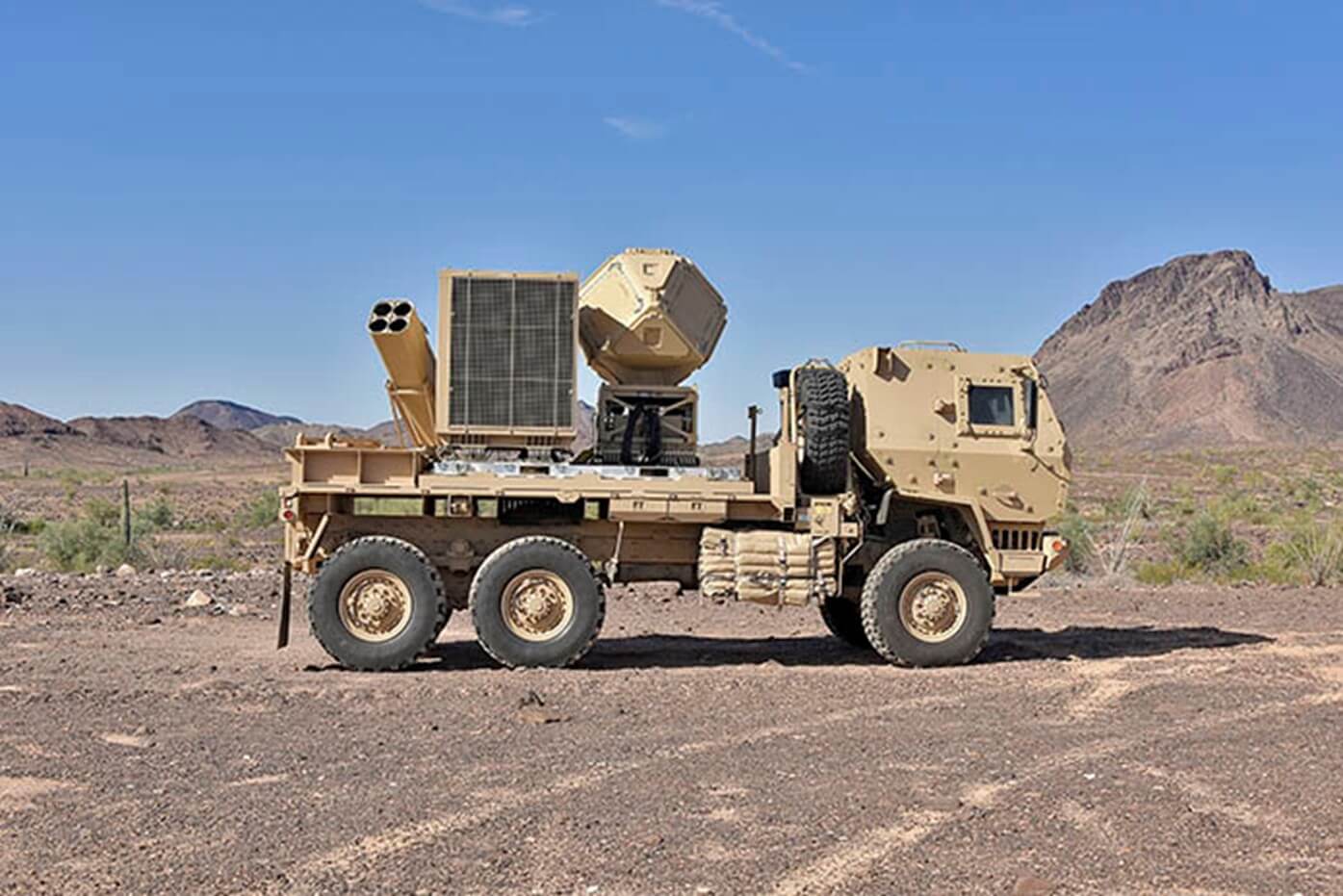 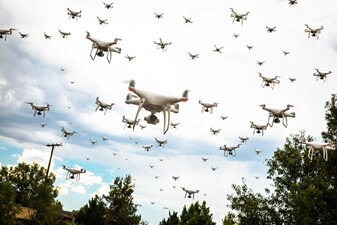 Clearly, as autonomous drones become commonplace, the next step is to have them move people around. Doing this safely is important to both passengers and people on the ground. Silicon Valley is a hotbed of manned drone technology development.  Advanced battery companies such as Sila Nanotechnolgies, Enovix, Blue Current, Quantumscape, and Sakuu are all collaborating with flight companies like Joby to produce reliable electric vertical takeoff and landing (eVTOL) vehicles for short range transport.  It’s very possible that we’ll see these vehicles flying before 2030.  Air taxi eVTOLs could be manned or remotely operated, taking passengers on short trip of 20 to 60 kilometers.  Flight cost targets are in the hundreds of dollars per person, and for those getting across the San Francisco Bay area on a Friday afternoon at 3:00 PM, this is likely well worth the money.

eVTOL vehicles, though sophisticated, still have similar issues as the rubber band powered airplane I built as a child.  Fighting gravity during taking off and landing still uses the most energy, and if there is a power or equipment failure, the outcome is likely catastrophic.  Bell Flight (Figure 4) is developing a more sophisticated eVTOL, with designs that feature fixed wings and vectored thrust, providing extra safety in case of a mechanical failure.  Vectored thrust eVTOL vehicles are more complicated than drone type vehicles like the Volocopter (Figure 5), where redundant motors and power systems provide a measure of safety but add weight and reduce payload capacity.  These multicopters are also slow relative to fixed wing aircraft because they use their propellers to provide both lift and horizontal propulsion. On the other hand, due to their lower complexity, copter type aircraft will likely be easier to qualify with the FAA, thus giving them a market timing advantage. 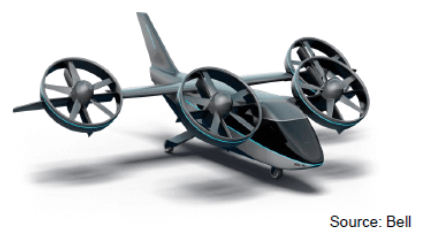 Figure 4. Vectored Thrust eVTOL has a fixed wing for safety

Engineering challenges for eVTOL aircraft are numerous. These will all have to be solved over the next 3 to 5 years so that reliability data is convincing enough for the FAA to allow their use in densely populated areas like the San Francisco Bay area. Elcon Precision, with our wide variety of fabrication technologies, is ready to provide solutions to accelerate this progress.  Our photochemical machining, ceramic assemblies, and materials science expertise can aid in developing safe power distribution systems, energy storage, controls, avionics, and fluid-based cooling systems.  Elcon is excited to help solve specific problems related to eVTOL vehicles, such as:

Beyond eVTOL, the future of electric flight vehicles is less clear.  Due to energy requirements for takeoff, landing, and longer flights, it will be well past 2040 when transcontinental zero-emission aircraft emerge. In the next decade we may see hybrid aircraft develop, such as Zunum Aero, where a supplemental jet-fuel engine and electrical generator would be used to give the plane a range of 700 miles and ensure it stays aloft after the batteries are exhausted.  There is also the SUGAR-Volt hybrid aircraft concept, that uses descent-based energy recovery to charge batteries. These aircraft will likely burn fuel to take off, then regenerate the batteries while landing. Beyond this intermediary of hybrid systems, some companies are expecting all electric airplanes for regional travel to be available by 2035. HES Energy Systems’ Element One aircraft and Airbus’s ZEROe are two that combine lightweight hydrogen fuel cells with an electric propulsion design to create hydrogen-electric aircraft. With the resolve to reach zero emission aircraft and increases in government and private funding, we hope to see an exponential growth in progress. Surely, we are living in exciting times!